How broken Spanish almost cost me my thumb 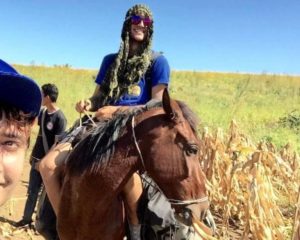 “Could I have one horse for tomorrow’s tour to Telica?” I asked the horseman in broken Spanish.

“Sí, claro que sí!” he says enthusiastically as he agrees to let me ride his horse up the active volcano Telica jut outside Leon, Nicaragua.

I had been a volunteer tour guide at a local tour agency for three months now, and I was getting ready for my final hike up Telica, the volcano I had previously summited 15 times.

Being an adventurous soul, and quite frankly tired of hiking, I had called the horseman to book myself a horse from which upon I planned on having a relaxing, yet thrilling last hike.

The hike up Telica was by no means an easy hike, with 5 hours of walking to the campsite with a 15kg backpack in 35-degree weather. So to lighten the load of my clients, I set aside two large bags for the horse and I, filled with most of the water we would’ve had to carry.

The following morning we met up with our clients and took the local ‘chicken bus’ out to the village at the base of Telica. As customary, the other guides and I, led the clients to the local mud pools, before I explained I’d be back in a minute with a final hiker, and set off to meet the horseman.

Finding the horseman was easy enough; however, the difficult part was that I had never actually ridden a horse.

My only experience with horses was this tiny pony I once petted when I was seven years old.

“That’s alright. I’ll just learn it on the way up. It is, after all, a 5-hour hike each way.” – I thought to myself nervously as I mounted the horse.

The horseman said there was no problem that I didn’t know how to ride a horse.

“Es facil!” he said as he went into an in-depth explanation of how riding a horse works.

While my Spanish was good enough to survive in Nicaragua for three months, I had never set aside time to learn any horse vocabulary. And of course, the owner did not speak a lick of English.

After about a 5 minute introduction to the horseriding world, we decided that it would be best that I just sit on the horse and learn as we go. Fortunately for me (and the horse), the horseman was going to accompany us to the top. 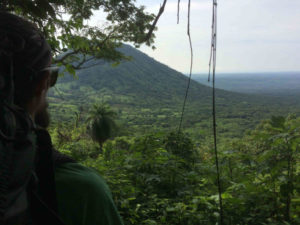 We headed back to the group as they were finishing putting on their sunscreen.

“What are you doing, Thomas?!” – one of the guides let out in disbelief.

While they did know I had rented a horse to carry our water, I had not told them that I was also going to be riding it. The clients however, loved it!

Our trek starts simply enough, and I quickly learn how to make the horse move forward, turn, and stop. However, the horse only seems to listen to my commands half the time.

He demonstrated his lack of respect pretty gracefully as we had a break at the 2-hour mark when he suddenly wanted to roll in the dust to cool off. A fair enough request, but I hadn’t gotten off yet.

A squashed foot later and a bruised rib from when I tried to get on the horse again and fell on my thumb (don’t ask), we were ready to continue our journey.

We arrive at the campsite without any other incidents, and the horseman continues to a nearby village for food and water.

The next day we meet him at the campsite, put all our tents and some water in the horse-bags before heading back home.

Usually, everyone is pretty tired on the second day, as we wake up around 4 am to see the sunrise from the crater.
This day was no different (except for me riding a horse), and like normal, we had a couple in the back that was walking a bit slower than the rest.

This didn’t cause any problems on the way down, but when we came to the desert, we had to pick up our pace. We call it the desert as it’s this incredibly hot and dry creek, with dense forest on both sides, and where the water had been replaced with cow remains.

The desert was the final stretch of our hike, and I decided this to be the perfect place for the slow clients and me to pick up our pace. I suggest to the clients that we start a light jog with the horse.

It starts off pretty bumpy and painful, so I shake the ropes and flail my legs, trying to make it go faster. It works!

The faster we ran, the smoother the ride was. But we also just lost the clients.

No worries, it’s only one trail, and they know which to take. Let’s go faster!

So I shake the ropes some more and kick the horse in the side.

“I got this! I’ve ridden this horse for 9 hours already; I’ll just pull both ropes to make it stop” I think to myself as I slowly start to lose control over the horse.

As I see the other clients, up ahead, I decide to pull the ropes to stop the horse and turn around to the last clients. To my biggest surprise, however, the horse only seemed to go faster, the more I pulled.

It turns out that pulling the ropes on a horse will make it stop. When it’s walking… Not when it’s already running. That will only make it go faster.

The clients jump away, laughing, while I try and pull the ropes to no avail. It just keeps going faster and faster, the more I pull.

That is till we come to the horseman.

Surely the horse will calm down when it sees its owner.

The owner sees my terrified face, and upon hearing my pathetic screams of terror, he starts laughing. 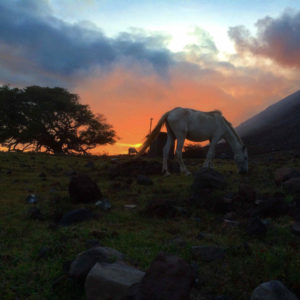 We come closer to him, and to my biggest fear, the horseman lifts up his arm and pretends to smack the horse. And with that one gesture, the horse shifts his gears from economic to sports mode!

We’re flying through the desert, and I’m screaming to the people we pass to get out of the way.

It felt like we were going at the speed of light.

My mind is racing to find out how to stop this ferocious beast – kicking the sides? Nope, he just goes faster – Pulling the ropes? Nope, faster – Screaming “stop” in Spanish? Pretty sure the horse just laughed at me

As we come to the end of the desert, there was a bridge, where we’re supposed to go up a little hill, to catch the bus. Does the horse know about this? Does it even know what a bus is?

Before I finish thinking this, the horse takes a sharp turn to the left, which sends me flying off the right. I soar through the air and land majestically like a sack of potatoes, only centimeters away from the trunk of a tree.

I stand up and shake off the dust and start laughing at myself.

“At least the horse stopped,” – I said sheepishly to myself.

It was at this moment I realized the searing pain in my thumb.
As I had no experience with a horse, I had naturally just rapped the ropes around my thumbs as not to lose my grip. Smart move, I thought.

Now, just a few weeks earlier, I had nearly cut off my thumb, when I tried the Gordon Ramsay vegetable chopping technique with an 8-inch, half-kilo heavy knife, so I guess my thumb was prepared for a new disaster.

Although covered in blood, my thumb won this battle and only sustained some mild rope-burn resulting in a manageable amount of skin being ripped off.

That day I learned the hard way how not to ride a horse.

Have you ever ridden a horse down a volcano, having no idea how to ride, for then to sprint past all your clients screaming and falling off and almost losing your thumb? No?

Mention “thumb-horse” when you sign up for your Mystery Trip and I’ll make sure you get proper training in English before your horse ride.